I’m gonna spit this out so I can cross it off of my shit to write about list and get on with my life which includes a guilt-free late afternoon nap as a reward for untangling the mess of words that’s been jamming up my mind these last few weeks.

Some of you already know ~ but most of you don’t, and because I like to tell the story, but it’s a rather long story, I thought I’d just write most of it down for you. For me. For whomever it may concern. On March 4, 2016 I legally changed my name from Kathy Lynn Gotsis to Katherine Lilith Gotis. 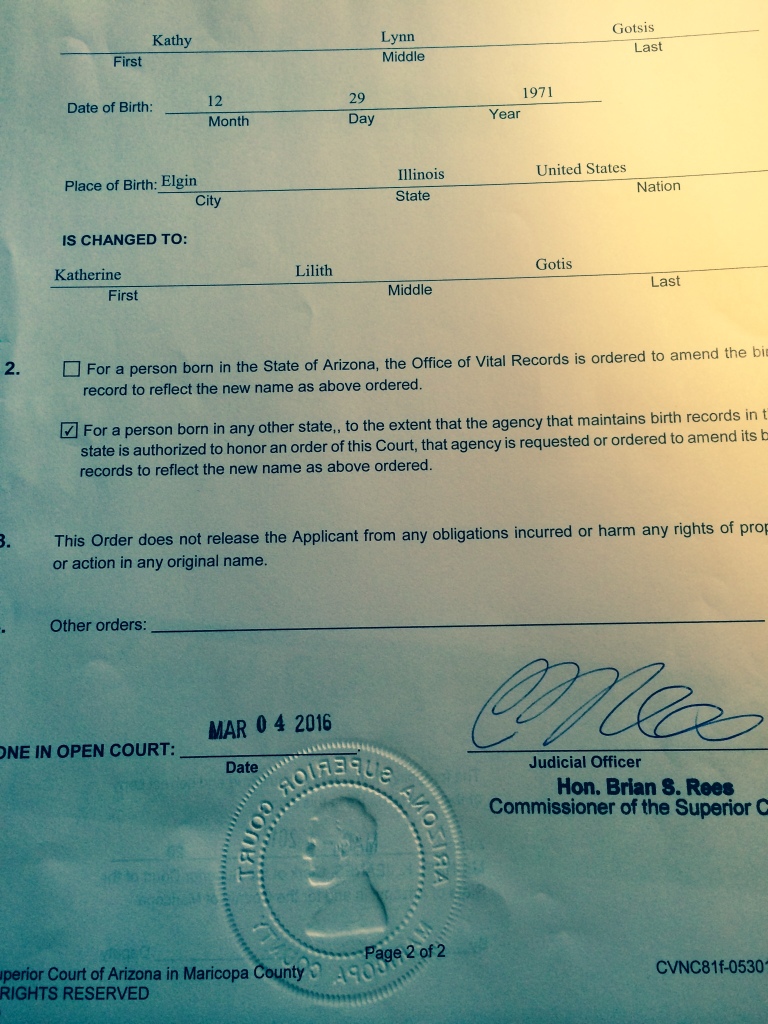 Explanations: Not that I need them, but I have them ~  They are abundant and all lined up just waiting to be smeared all over your mind.

On the change from Kathy to Katherine ~

Katherine is of Greek origin ( Me too ) it comes from the Greek catharos which means catharsis and pure.

*First of all, who in the hell is Kathy? Okay, there’s that comic strip Cathy that started in the late 1970’s and spanned the following four decades. She was a frumpy cartoon character who spent her time whining and overeating and working at a job she hated. She was a complete bore and not even one quarter funny. I’ve never been Kathy. ( Okay, maybe a just little bit… in the past :/) If you are Kathy, I mean no disrespect. It’s a fine name, it’s just not mine.

*My father was a misogynist. He claimed to have named me after my Aunt Katherine, but because my father thought that girls should have names that were “short and sweet,” he took parental license and gave me a nick name. How sweet.

*I never felt like Kathy. Kathy felt untrue, but so did the frozen anti-depressant soaked life I was mostly not-living up until I was renamed Kate by my friends in 1999 when we opened up a yoga studio together and I started teaching . Kate stuck. Yoga stuck. I didn’t change my name, it sorta changed itself, and well, yoga changed Kathy into Kate…we were getting warmer…

*Because I work for an organization that makes us wear badges adorned with our legal names, I get called Kathy a lot. I don’t like it. I correct people. My name is in the computer system at work as Kathy. My phone rings and someone who doesn’t know me calls me a fake name. Not their fault, but I noticed how it made me feel to be called Kathy. It made me feel unseen and unknown and invisible. That was my childhood. The people who still insist on calling me Kathy also insist on reminding me how much they don’t know me. That’s okay, but it’s a “You don’t know me” giveaway.

On the change from Lynn to Lilith

*Lilith was Adam’s first wife. She was thrown out of the Garden of Eden because she wouldn’t be subservient to him, so they brought in Eve. Lilith believed that because she and Adam were made from the same elements, they should therefore enjoy the same rights. Lilith is associated with mystery, the subconscious, power, independence, and the scary places we don’t want to go. She has been demonized ( literally )  ~ but so have many truly badass women. And yes ~ The Lilith Fair.

*I always felt like Lynn was a filler. It seemed to me that everyone’s middle name was either Lynn or Marie. My sister’s middle name is Marie. I’ll bet your sister’s middle name is Marie too.  I felt ripped off in the same way I felt ripped off when my grandmother was chosen to be my godmother, like my parents had no vision, no imagination ~ they were lazy and just settled for whatever happened to be close by. Godparents give their godchildren special presents and money and it was completely unfair to choose my grandmother who already gave me presents and money. She also gave my brother and sister presents and money. Yes, she took me to church and taught me the trinity that were my fingers and also the Father, Son, and The Holy Spirit. Crossing myself, kissing pictures of saints, lighting candles. A bunch of rituals that amounted to a big fat pile of nothing but fond memories. I loved church, but I didn’t love having my grandmother as my godparent, nor did I love having Lynn for a middle name. It feels good to get that off my chest! Oh, and in case you’re wondering (   know you’re likely not wondering, but I want to tell you anyway )  I was eleven years old when my father finally got around to baptizing me. I had been protected by my Jewish mother up until this point. Oh, and it just occurred to me that I was given a baptismal name, “Katarina, ” which if not pronounced with a swirly Greek accented tongue, sounds just like Catalina, which is a sweet tangy orange salad dressing that used to be as popular as ranch in the 80’s. You’re welcome.

On the Change from Gotsis to Gotis

This seemingly small change feels the most powerful to me. All these changes are symbolic, but this change symbolizes an amputation of dead rotting flesh and cellular/spiritual regeneration.  The death of an S = the birth of a world.

*I have no attachment to this name. It isn’t one that carries any special privilege or pride. For me it is a heavy weight that represents a deep Greek tragedy. A paternal -flavored ancestral unconsciousness that I have been busting my ass for years to wake up from.

*Barbara Gotsis was my father’s wife. She was certifiably insane. She buried the bodies of old women she had cared for in her backyard. My father allowed her to psychologically and emotionally abuse his children. Google her if you want more.

Gotsis. Not my mess. Not my wounds. I’ve done my work and I’ll continue to do my work.  I will no longer do the psychic and emotional processing for my  family. I was born into deep unconsciousness bilaterally, the levels of denial and projection that I have witnessed in myself and in my family are astounding. I understand it, and I’m healing it, but I’m done doing it for my relatives. If I agreed to this before my incarnation, ( as my mother liked to say) I did it unconsciously. I am quite conscious now as I take back my life and send back to the rightful owners both living and deceased their emotional and psychological baggage. My gift to family is my healing and the severing of energetic tendrils that fed off of me and my willingness to carry more than my fair share of pain in an effort to have a family.

I could go on for a mighty long time about the wobbliness and fluidity of identity and the ultimate meaninglessness of a name in the grand scheme of things, but I won’t because I’m lazy and I want my nap. Just let it be known that my naming is a spiritual and psychological rebirth and reclamation. I have christened myself Katherine Lilith Gotis.

It can’t ever tell you who I AM.

But after my love tweak, I think it’s much closer to the truth.

4 thoughts on “My Name is Not Kathy Lynn Gotsis”

View all posts by Kate